Al Hansen (Alfred Earl Hansen) was born in Queens (NY) in 1927. As a member of the Neo-Dadaist Fluxus group founded in the fifties with the idea of breaking down the barriers between the various artistic categories (visual art, music, theatre, poetry, performance and happenings), Al Hansen was a pioneer in the field of performance. He joined the American Air Force during World War II, coming to Europe between 1940 and 1945, and during the occupation he performed one of his first happenings in Frankfurt, Germany. It consisted in pushing a piano down from the fifth floor of a building that had been half destroyed during bombing. The performance, known as Yoko Ono Piano Drops, would often be repeated in other cities, becoming one of his best known works. Back in New York, he began to study art and enrolled on courses taught by John Cage at the New School for Research, which he attended along with George Brecht, Dick Higgins, Allan Kaprow, Jackson Maclow, and so on; all of whom were members of Fluxus. Like a flowing stream, art is seen as the uncontrollable movement of an event or object, where the humdrum becomes the main raw expressive material from which to draw. The everyday dimension, in particular in the sense of popular culture, was also explored by Al Hansen, who, as Kaprow tells us, “preferred to do art as if it were being put together on the road (exactly like his life), using the materials that he happened to come across. Candy wrappers and photos from cheap porn magazines”. In the sixties he became a regular attender at Andy Warhol’s Factory, moving into pop art culture and away from performance towrards other forms of expression, such as collages and assemblages, where the iconic female body is always present. Inspired by the sinuous and welcoming forms of the famous Venus of Willendorf, he started reproducing her features in countless works that he called Venus, collages made from the most disparate materials, such as Hershey’s cards, cigarette ends, rolls of toilet paper, and motion picture film. Al Hansen’s imaginary also touches on some key points in the history of the United States, such as the Native American question. In the series A visitation of Fantoms, presented at Studio Morra in Naples in 1990, he made round tables upon which he placed plaster casts of his own face, adorned with traditional symbols of the American nation and the native populations, such as headdresses with feathers, taken from post-colonial culture. Like the other members of the Fluxus group, Al Hansen did not like to call himself a “professional artist”, as “Fluxus’s art is anti-art (mostly made) by non-artists, small French pen pushers, chemical researchers, contermporary journalists… “. His art took the everyday as the starting and end point, so that art and life formed but one single dimension. He died in Cologne in 1995. 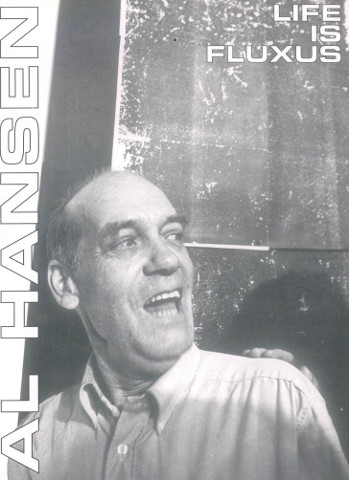