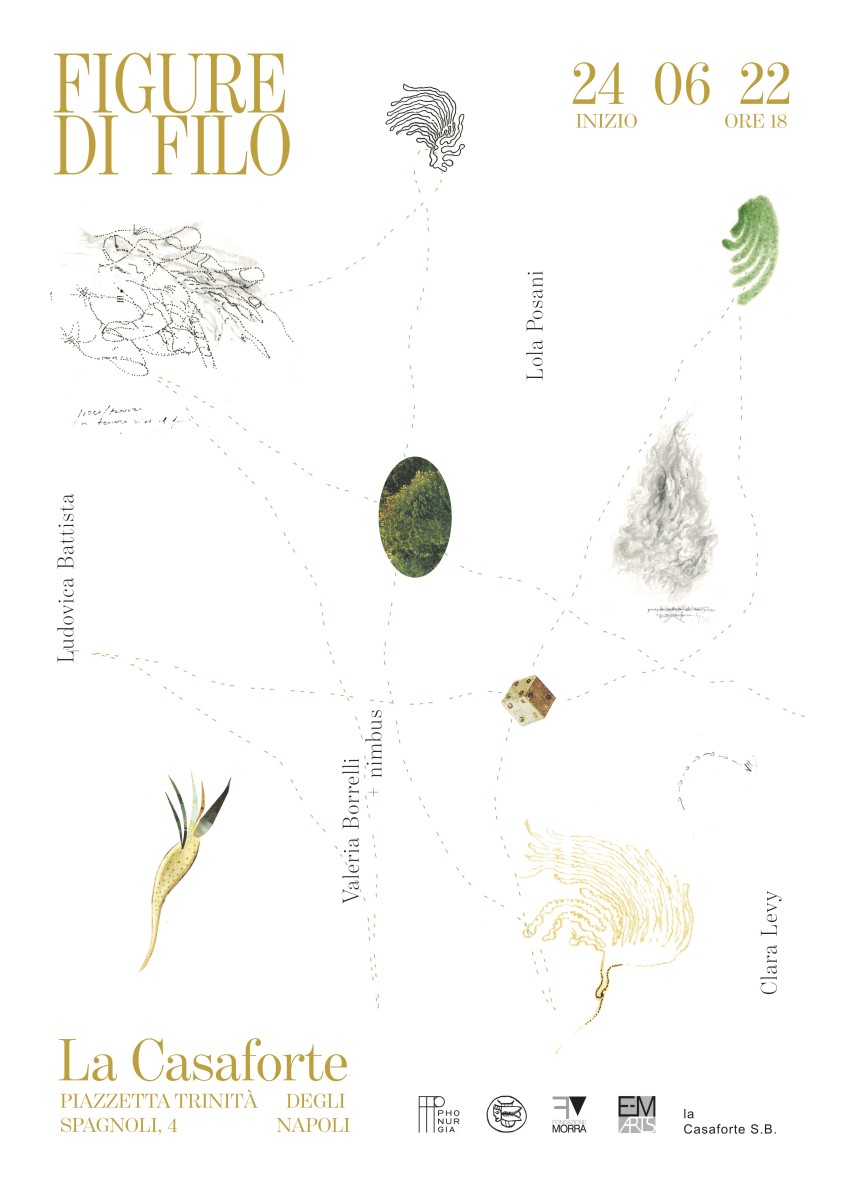 Places are limited – Admission by contribution – To book, please send an email to figuredifilo@gmail.com

𝐅𝐈𝐆𝐔𝐑𝐄 𝐃𝐈 𝐅𝐈𝐋𝐎 is a programme, a practice, a game, a desire, an idea that seeks its own form and texture. It is the result of the collaboration between Giulio Nocera (former founder of La Digestion festival), the Sound Art festival AKRIDA (Lola Posani), the art space La Casaforte in collaboration with the Fondazione Morra and with the support of the EM-ARTS association.

𝐅𝐈𝐆𝐔𝐑𝐄 𝐃𝐈 𝐅𝐈𝐋𝐎 (string figures) is an expression borrowed from the thinker Donna Haraway who, in turn, borrows the expression from one of mankind’s oldest hobbies (string game, cat’s cradle) to imagine a new way of existing and of constructing narratives.

As Haraway clearly explains, the figures created by the threads in string figures game are like stories, proposing and activating complex patterns that participants can occupy and inhabit.

Some Navajo thinkers describe string games as a type of pattern-making useful for restoring hózhó, a term that can be imperfectly translated as ”harmony”, ”beauty”. But making figures of thread also means weaving unprecedented relationships, letting threads hang, presenting enigmas, promoting multi-species becoming-with, in «a risky game of worlding and storying; it is staying with the trouble».

Our game opens on 24 June with its first event, Figure 1, which will let the first threads hang at La Casaforte, a space for independent art and thought born from the recovery of a 16th-century cloister in the heart of Naples’ Quartieri Spagnoli, inherently dedicated to the game of artistic and relational interweaving.

Figure 1 is structured into a full day of activities.

The first thread runs through the hands of Lola Posani, voice researcher, independent curator and Deep Listening facilitator. The workshop proposed by Lola stands at the intersection between her improvisational research and Deep Listening, a practice created by Pauline Oliveros, pioneering American composer, improviser and performer, which explores the difference between the involuntary nature of hearing and the voluntary and selective nature of listening.

Deep Listening includes body practices, sound meditations and work on scores, as well as conscious listening to the sounds of everyday life, of thoughts, of imagination and of dreams. During the workshop, participants will be invited to investigate their inner soundscape and to explore the acoustic reality that surrounds them.

The programme is followed at 6 p.m. by the screening of the short film STRATI by Ludovica Battista, architect, writer and independent researcher with a transdisciplinary perspective. Ludovica’s work explores the current territorial condition, the interspecies living flesh of the world, with a focus on risk, destruction and invisibility as political and poetic issues. STRATI is the visual result of a long research on the Vesuvian urban agglomeration, land on the edge of destruction and intimately driven to survival; a study about tearing anthropized landscapes out of superficial visions. Following lava flows from the last extensive eruption from 1631, images put together a stratified, emotional way to expose its territory, to feel it, to think it and therefore to imagine it. The soundtrack of the film was composed especially for this feature by Giulio Nocera, a Neapolitan composer.

During the same time slot, it will be possible to visit 𝗟𝗔 𝗧𝗘𝗠𝗣𝗘𝗦𝗧𝗔 – precettare il tempo, installation curated by Valeria Borrelli with 𝐠𝐫𝐮𝐩𝐩𝐨 𝐢𝐧𝐟𝐨𝐫𝐦𝐚𝐥𝐞 𝐍𝐢𝐦𝐛𝐮𝐬.  In the installation, the arms crossed to form an unbroken chain, clasped by the hands, offering the right to the companion behind and the left to the one in front, give life to a movement; a perpetual circular dance is the “rite against the storm” that is ascribed as a “precept of time”, a request to observe a superior and divine order addressed to the natural elements that threaten it, in which the actions and souls of the community are brought together to ward off the danger.

A presentation of both projects will follow at 7.30 p.m., as well as a discussion between the authors and the audience.

The last event of the day, at 9 p.m., will be the presentation of the Italian premiere of Belgian violinist Clara Levy‘s new solo project 13 visions. Her current musical projects are inspired by erosion, slowness, the microscopic and an imaginary Middle Ages. The ’13 visions’ project is an imaginary encounter between two female composers whose musical aesthetics share many common traits, despite the centuries that separate them: Hildegard Di Bingen and Pauline Oliveros. Their respective visions thus converge in a cycle of thirteen pieces for solo violin. Halfway between composition, arrangement and quotation, the starting point of this project is the score of Pauline Oliveros’ text ’13 changes’: thirteen poetic instructions – inspired by earthly or cosmic events. Levy’s project retains the structure intended by Pauline Oliveros, while her instructions determine the sound universe of each piece through various performance techniques and instrument preparations. The hymns of Hildegard von Bingen appear ‘in the shade’: the violin, in the role of a drone, proposes a sober harmonization of the chosen melodies.