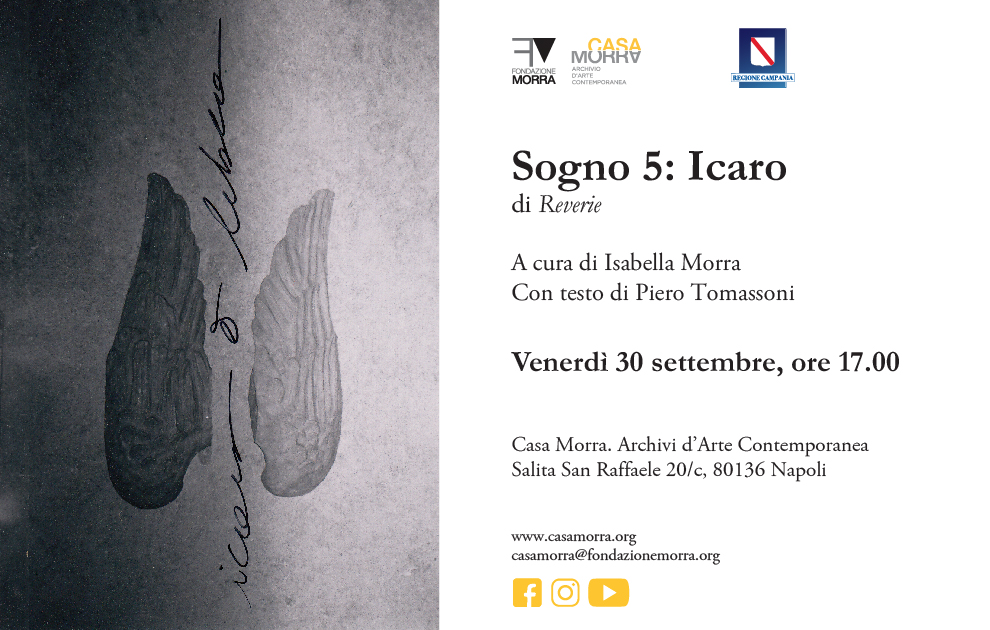 From 5 pm on Friday 30 September 2022, Casa Morra. Archivi d’Arte Contemporanea in Naples will be hosting Reverie in the performative action “Sogno 5: Icaro” (Dream 5: Icarus).
The project, with a text by Piero Tomassoni, has been curated by Isabella Morra.

Concluding her cycle devoted to dreams, conducted over the years as a privileged alphabet of research, this Tuscan artist proposes a contemporary reinterpretation of the Icarus of Greek mythology, dedicating to the city of Naples her latest dream-themed performance. Initially suspended from a crane in the forecourt in front of the former chapel at Casa Morra, Reverie will re-enact for the audience Icarus’s fateful flight.
The mythological Icarus assumes the burden of disobedience to the world’s constraints, rules, and laws. It is a challenge to what is reassuring – the desire to surpass human limits, to look upwards and go beyond. But it is also the recklessness and impudence of a youthful idealist whose naïveté is transformed in Reverie’s work into a dreamlike experience that acquires a totally new and topical meaning.
Her Icarus is “contemporary”: a genderless figure with prosthetic arms whom the artist has also represented in some of her opere-indivenire. She will appear as a majestic red wax sculpture with a cast around her torso. To this are attached two wings and a World War II parachute, to which the incipit of the biography of this new Icarus, that is, the story that gave life to the work as a whole and to the performance itself, has been stitched onto a satin insert in the artist’s own handwriting.
The story of the project, as in all Reverie’s work, thus originates from the desire to construct collective dimensions and memories that become a sharing zone between artist and audience. In the open space of Casa Morra, the relationship between Reverie and the audience will be consolidated in a communion of emotional tension through an empathic relationship in which energies merge with the artist’s body.

The myth of flight, of touching the intangible, the sky, would not exist without its opposite: the fall. They are antimeres of the same root: the push toward the beyond, a journey that humanity has shared since its beginnings (Isabella Morra). The contemporary Icarus, however, takes his place in history in a new way, celebrating life with its difficulties, loneliness, burdens and sufferings; he is every human. For centuries, “Icarus” has been the therapeutic and sapiential song passed on from master to disciple, from plant to healer in the Amazon. He has now become the mantra of Reverie (Piero Tomassoni).

Casa Morra. Archivi d’Arte Contemporanea will be open to the public from 4 pm.

Reverie (Vinci, 1994) lives in Milan, dedicating every moment, action, and every rose of her life to Art. Her real name, which she has chosen for life and art, is a dedication to Bachelard’s Poetics of Reverie (nomen est omen). She works on contaminations, the interference of conceptual and emotional gazes and reactions, starting from interiority and profound solitude. She realizes performances representative of collective society, contemporaneity and feeling, between the real and the virtual. From the spark of intuition she creates texts to which she gives material form, personally constructing all the elements necessary for the action. Crossing anthropology, literature, philosophy, psychoanalysis and the sciences, she has turned the study of dreams, even “daydreaming”, into an original line of research to develop an artistic language through which to investigate reality, crossing archetypes as memories and “collective dreams”). She has produced several works on this theme and published a book, librosogni with Skira (2021). Recent exhibitions and performances include: Il corpo dei sogni (solo show, 2022, Basilica di San Celso, Milan); Sogno 5: Icaro (2022, Casa Morra – Fondazione Morra, Napoli); Sogno 4: alba lunare (2021, Festa della Ceramica, Montelupo); Sogno 3: la camera degli specchi (2021, FOG, Triennale, Milan); Sogno 2: The Sleeping Muse (2020, Palazzina Liberty Dario Fo e Franca Rame, Milan, in collaboration with Fondazione Mudima and curated by Raffaella Perna); Sogno 1: l’archetipo del sé (2019, Fondazione VOLUME! Rome).

Dialogue between R and I – Interview by Isbella Morra

An Icarus for Reverie – Piero Tomassoni