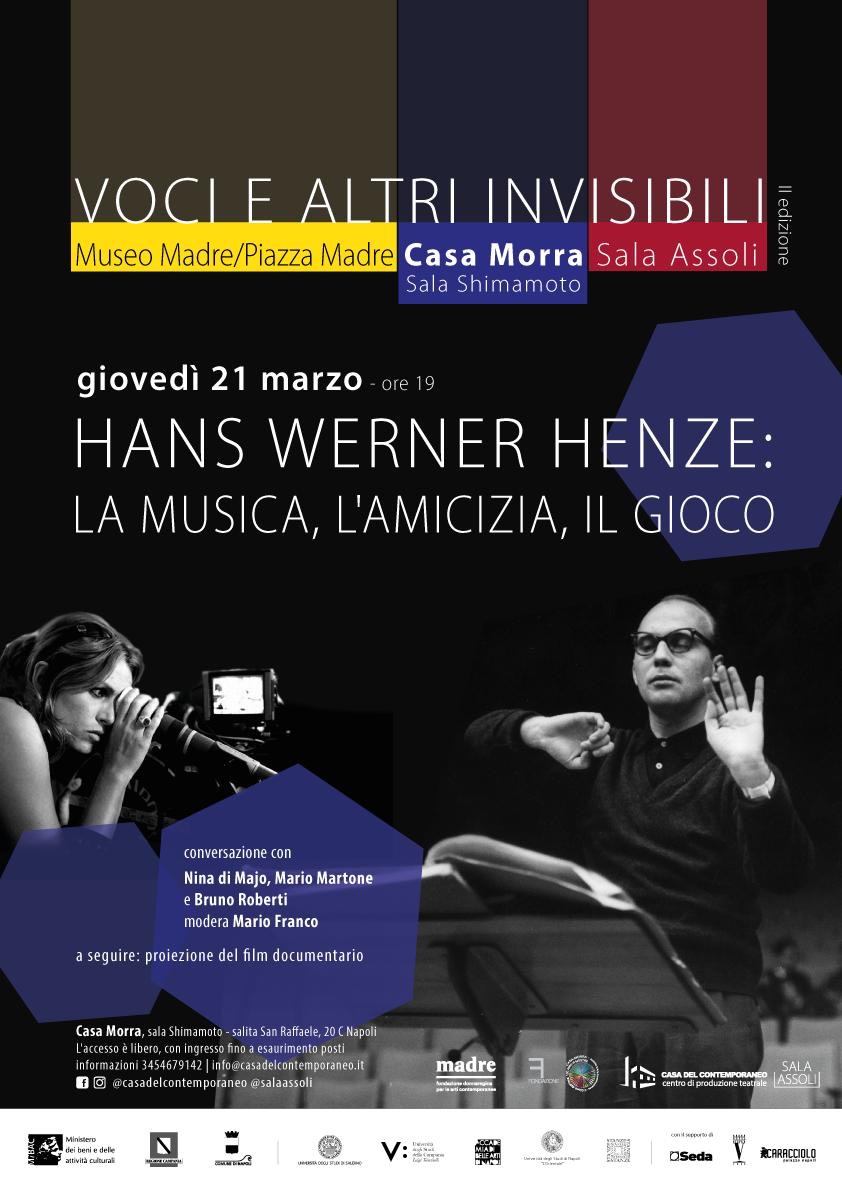 After the opening in Sala Assoli with “Eloquenza delle lacrime” by Benedetto Sicca, Casa Morra is pleased to host the review “Voci e altri invisibili”.
Thursday, March 21, starting at 19.00, in the Shimamoto Room of Casa Morra there will be a meeting with Nina di Majo and Mario Martone and the screening of the documentary film “Hans Werner Henze: music, friendship, the game”.

The documentary directed by Nina di Majo tells the life of Hans Werner Henze, homosexual composer, German, resident in Italy, known for his Marxist political views and their influence on his work. (Gütersloh 1926)
The film is a journey through a restless life, that of a man possessed by music, his artistic and existential journey, between momentary losses and continuous transformations, heartbreaking fractures and flashes of serenity. “Enhancing the beautiful material of the Istituto Luce, we retrace, through the composer’s pains and impatience in his father’s house, the stages of Nazism and the horrors of war – says the director – The study of musical composition will be investigated through interviews with those who knew and studied him (Roland Baoer, Alessio Vlad, Nanà Cecchi, Pierluigi Pizzi, Gioacchino Lanza, Ilaria Borletti Buitoni, Nuria Nono, Massimo Cacciari) and who collaborated with him. And then the music that takes flight, in the adored Italy, the Dionysian and liberating south, Naples, the San Carlo, the Italian glamour (of the years ’55-’75), Ischia, Piedigrotta and the utopia of the Mediterranean life that is realized. In Naples, the love between Hans Werner Henze and the poetess Ingeborg Bachamnn, who was born and died told in the reading of the correspondence “Letters from a friendship”. And then, score after score (Tom Thumb, The Prince of Homburg, Der Junge Lord, Elegy for Two Young Lovers, Gogo no Eiko), poised between experimentalism and tradition, the story of the composer’s experience and the birth of the “Cantiere di Musica” school in Montepulciano. Henze decides to follow a very personal concept of beauty, always ready to cross boundaries, in music, in politics, as in private life”.

HANS WERNER HENZE: MUSIC, FRIENDSHIP, THE GAME.
Direction: Nina di Majo
Production: Nina di Majo – Red Velvet
LIGHT INSTITUTE.
Editing: Diego Zucchetto. Color Correction Alessandro Abate.
With the support of the Film Commission Campania, Lombardia and Toscana. With the participation of the Istituto Cantiere di Musica of Montepulciano, which provides archival and photographic material.
“Letters from a Friendship. Carteggio, EDT. (Ingeborg Bachamnn- Hans Werner Henze).
The Luce Institute makes available to the documentary film its invaluable repertory material regarding the History of Italy between the years 1935 and 1970, which will be greatly enhanced. This material will be used with elegance and skill to tell the story of the composer’s life amidst the horrors of Nazism, the beauty of southern Italy, Naples, Ischia, the San Carlo theater in Naples and the glamour of those years, but also Piedigrotta, and the parades of floats, the fishermen and the sea.