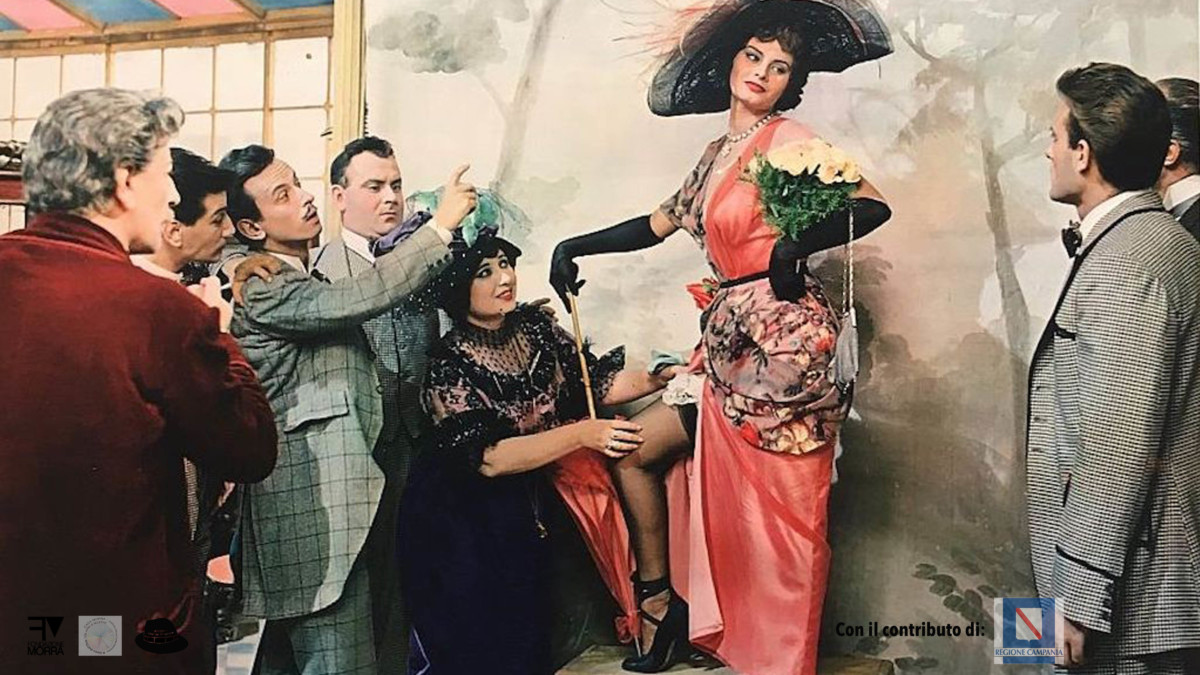 Tuesday, December 10th at 18:30, the Morra Foundation presents to the public the Film Festival IL CINEMA A NAPOLI DALLE ORIGINI AD OGGI, a project financed by the 2019 Annual Cinema Plan of Regione Campania, Section 2. Promotion of film and audiovisual culture and dissemination of film culture.

At the Mario Franco Archives, within the historical frame of Palazzo Ayerbo d’Aragona Cassano, the artistic director Prof. Mario Franco will start the selection of auteur films of “The greatest invention of the century”. Together with him, the outstanding guest Alberto Castellano, essayist and film critic, presents to the public the first movie of the festival symbol of this season, Carosello napoletano, born in 1954, directed by Ettore Giannini and with Sophia Loren and Paolo Stoppa.

The intent of the initiative is to retrace the great passion of the city for the cinema, which since the end of the 19th century has become part of an environment rich in traditions and spectacular occasions, at a time when the theatres are so crowded, at San Ferdinando there are tears-wracking dramas, Scarpetta turns his most famous farces from the French and the whole city seems to move on the air of the most famous songs of the variety or of the Piedigrotta.

Within a few years, Naples is filled with cinemas. The Sala Iride, the Arenile Olimpia, the Cinema Moderno, the Salon Parisienne, the Vittoria, the Alberini, the Umberto, the Krumas, the Internazionale, the Sala Roma, the Trianon, the Santa Brigida, become meeting points for professionals and wastrels.

This cinema fever is not limited to multiplying theatres; the first film producers born, such as Roberto Troncone, starting with short documentaries (Ritorno da Montevergine, 1903) and then moving on to the verist feature film (Camorra, 1905), inaugurating a controversial collaboration with Roberto Bracco. Troncone is the first to constitute a “theatre of pose” to realize his films, soon followed by a colorful assortment of failed lawyers and former glovers, typographers, tailors and poets who had learned to grind movies with their machines “Lumiére” inventing a market that had nothing to envy to that of Rome or Turin. And how much this phenomenon is important in the Italian and European panorama can be learned by the analysis of the specialized cinema publishing sector, from the Neapolitan silent cinema of the origins to that of today, to its specific thematic and linguistic choices that Italian cinema will make its own.

12 December: Assunta Spina (1915) and ‘A santanotte (1922) by Elvira Notari, introduction by Pasquale Iaccio

To further enhance the programming, meetings with authors and critics such as Alberto Castellano, Pasquale Iaccio and Pasquale Scialò who will anticipate the moment of the viewing-projection of the rediscovered cinema. Cultural climax of the exhibition, Saturday 21st December, the award of the prize for the production and sound in contemporary key of Neapolitan inspired silent cinema.