Exodus, escape from Libya Stalker – The Scream, listening to inhumanity 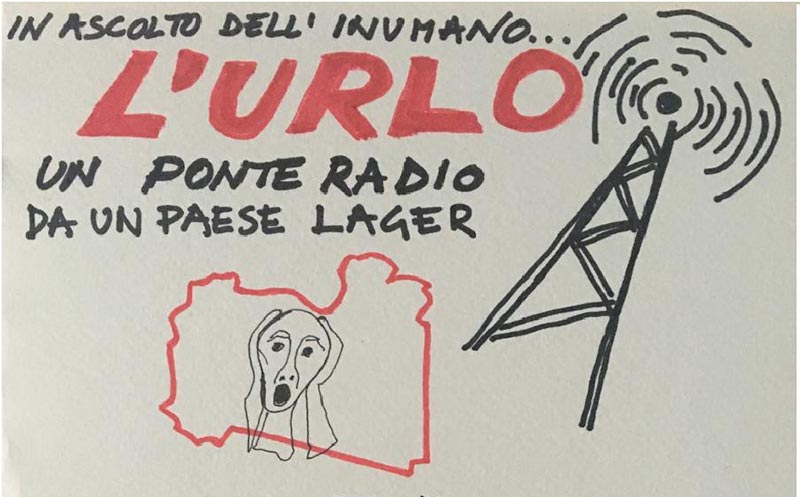 Palermo and Naples, Orlando and De Magistris, two historic cities of southern Italy, and their mayors, are leading the civil and institutional resurgence of Italy and Europe against the criminalization of refugees and migrants.
Along with their rejection of the Italian government’s “security decree” and its closure of Italian ports to migrants rescued at sea, the two cities are echoing the desperate appeals of thousands of migrants stranded in Libya. These migrants describe a reality that governments and mainstream media have minimized and even concealed: a living hell, in which men and women are reduced to slavery and subjected to violence, kidnapping, forced labour and torture. Many of them, convinced by now that Europe offers them no hope, are ready to be repatriated.
The mayor of Naples, Luigi De Magistris, will participate in an event, “The Scream, listening to the inhuman”, in the cloister of San Domenico in Naples from 16 to 20 January, from 11 to 18.30. The event has been created by Exodus, escape from Libya and Stalker, and aims at amplifying and disseminating the appeals of migrants that have been sent over many months through social media to Michelangelo Severgnini**.
During the event, the Mayor will speak by phone link directly with some of the migrants in Libya, to assure them, the country and Europe of his commitment to highlighting the gravity of their plight and the urgent need to activate an airlift that will allow the exodus of all migrants, as requested by the migrants themselves. The gravity and urgency has gone largely unmentioned, despite the fact that the Italian government and the European Union bear direct responsibility for what is happening in Libya.
The mayor of Palermo, Leoluca Orlando, gave his support to a similar event, “The Scream of Palermo”* held during the international summit on Libya, in Palermo in November.
The project in Naples is organized in collaboration with the Fondazione Morra and “l’Orientale”, University of Naples.