Piero Mottola. Concert with a view 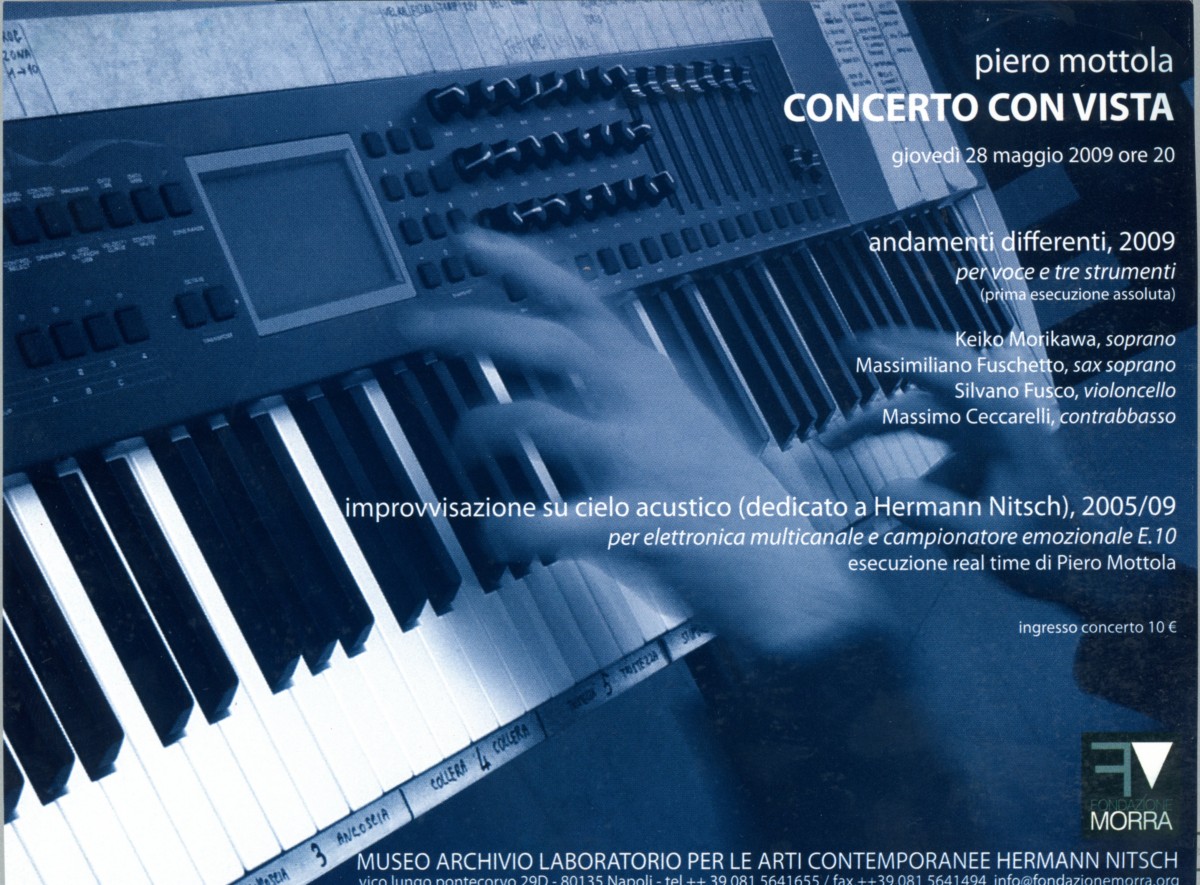 IMPROVISATION ON THE ACOUSTIC HEAVENS (dedicated to Hermann Nitsch)

Differing Paces, composed for the Morra Foundation of Naples, is one possible, unusual musical composition designed to give an answer to these questions.

Emotional Distances is a compositional system based on ten emotions. It was created by measuring the emotional activation of a representative sampling of natural, artificial, human, and animal sounds. For each stimulus we first determine which emotion receives the highest score, and then determine its distance from the other nine emotions by evaluating the statistical distribution of the choices. Summing the information accumulated for each stimulus allows us to construct a space in which to locate the ten emotions according to their distances: 1=maximum emotional proximity; 9=maximum emotional contrast. Emotional Distances is a system which makes it possible to construct a large number of emotional structures of varying levels by using figurative and abstract sounds, acoustic instruments, colours, and images. It also allows us to organise unusual, enigmatic, and captivating aggregations of timbre.

Differing Paces is an emotional promenade with three relational levels and a building crescendo of contrasting emotions. The algorithm created defines a progressively increasing contrast among emotions as well as among rhythmic evolutions. The timbres employed are the result of a spectral analysis of emotional sounds. Each sound evolves according to an experimentally derived algorithm and is representative of one of the 10 emotions. The numerical evolution assigned to each sound is given an acoustic form by considering the acoustic extensions of the instruments employed.

The E.10 Emotional Sampler is an 88-key MIDI keyboard divided into 10 emotional zones (FE fear, AN anguish, AG agitation, AR anger, SA sadness, EX excitement, AW awe, PL pleasure, JO joy, CA calm). Audio files containing experimentally derived emotional sequences are assigned to each zone. In addition to triggering the files, each zone can also perform real-time modifications. The E10 Emotional Sampler can produce multiple emotional promenades which are complex, unpredictable, enigmatic, and emotionally significant. Improvisation on the Acoustic Heavens combines an abstract electronic composition for 7 spatialized emotional pathways of increasing emotional contrast (from minimal to maximal), with the combinatorial potential of the E.10 Emotional Sampler. The Sampler is programmed by the performer in real time to produce emotional algorithms for the piano.