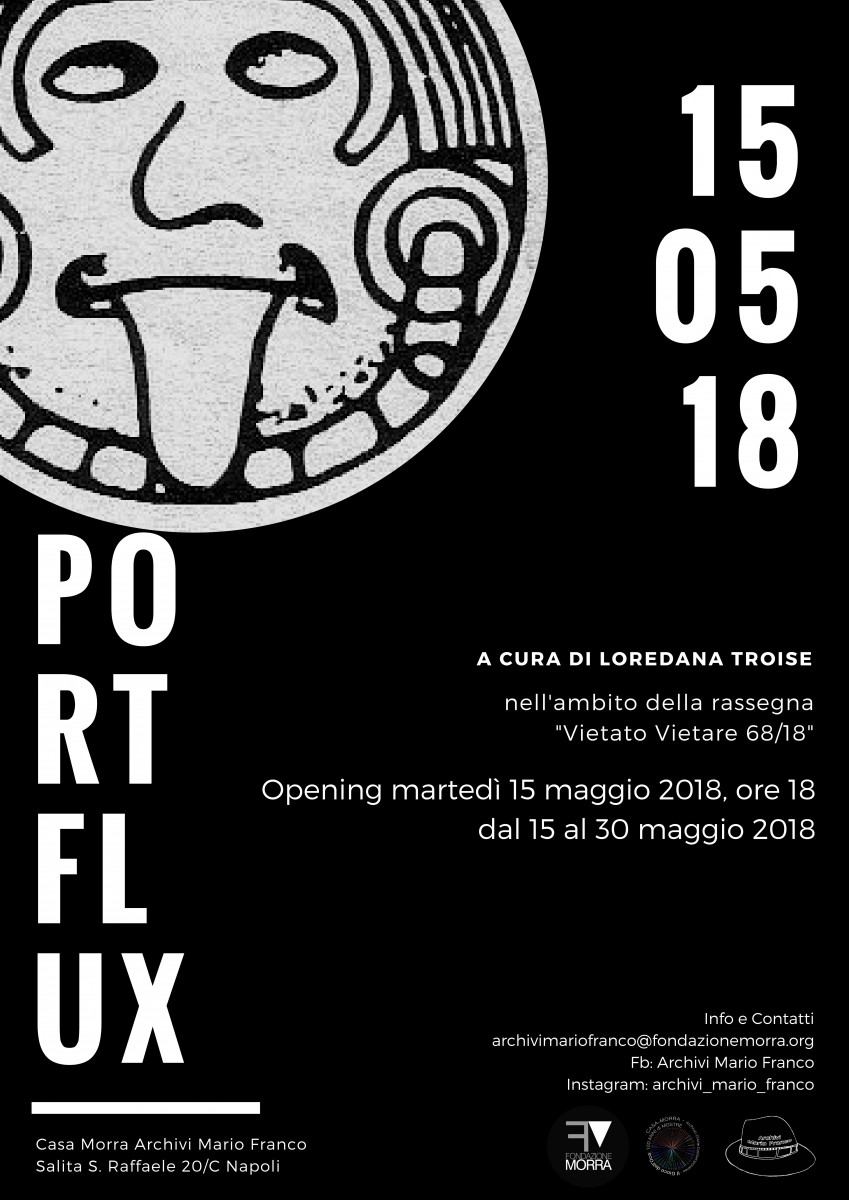 Opening of the Portflux exhibition, curated by Loredana Troise, at the Mario Franco Archives in Casa Morra on Tuesday 15th May 2018 at 6 pm. At the opening of the exhibition, which is part of ‘Vietato Vietare 1968/2018’ Proiezioni, incontri, mostre a cinquant’anni dal 1968 (‘Forbidden to Forbid 1968/2018’ Screenings, encounters, and exhibitions fifty years on from 1968), there will also be an opportunity to see the documentary ‘Antologia Fluxus’ (by various artists, 120 min).

Mario Franco, curator of the review and founder of the Archives, asks,

‘Why a review and an exhibition on the Fluxus collective among the commemorations recalling the events of fifty years ago?’ Because the ‘imagination in power’ of 1968 also meant the meeting and mixing of arts, techniques, disciplines, languages, and materials, as well as their liberation from the requirement to produce meaning and to stop narrating the world in a descriptive, linear, and complete manner, starting from a reflection on language, on ways of narrating, as the world itself has changed so quickly and profoundly: the metropolises have become a remarkable ‘training grounds’ for a mobile and multiple outlook. An idea of multimediality began to find its way into an awareness of the inadequacy of just one medium, a single art, a specific and sectorial technique to represent this plurality of stimuli, this dense network of interconnections. The Gesamtweldbild (total image of the world) takes up and extends the Wagnerian concept of Gesamtkunstwerk. Fluxus assembles different techniques and materials: collages, poetic texts, architecture-sculptures-environments to unbind cultural habits and perceptual automatisms, to tease out unexplored possibilities from different languages, attempting to assemble them in a new way, creating combinations as rich and complex as thought (or the world). An anthology of the movement’s films includes the body-artistic previews of Yves Klein, moving on to show the origins of the video-art of Nam June Paik with Allen Ginsberg, Charlotte Moorman, Alan Schulman, and the Living Theatre. This is followed by a short concert of music by John Cage on the Holocaust, the experimental film ‘T.O.U.C.H.I.N.G.’ by Christopher Sharits, two performances by Joseph Beuys, George Maciunas (who founded Fluxus, giving it its name in 1961), the Viennese actionism of Günther Brus, plus John Lennon & Yoko Ono, and Vito Acconci.

The screenings are accompanied by Loredana Troise’s exhibition of graphic works by key artists of the Fluxus movement.

In the words of curator Loredana Troise:

14 extraordinary graphic works making up the Portflux portfolio (Factotum Art edition) and closely connected with the “Forbidden to Forbid 68/18” project are showing at the Mario Franco Archives. An adventurous and unpublished diary of the eye with indefinite boundaries pointing to the restless threshold of the present, between incarnations and transits, imagination, and the re-functionalisation of forms. Sarenco, Diego Strazzer and Giuseppe Morra came up with the idea for the Portflux collection in the 1980s. It is the result of an intense and unique experience born from intersections, travels, and relationships between researchers and fluxeur artists in the eighties: ‘each work in the portfolio’, explains Giuseppe Morra, ‘is a chapter born out of a long history of collaboration, friendship, and directly shared events: nothing to do with the logic of “making art”, but freely directed towards emancipated and independent semiotic revisions’. Giving order to a complex and varied visual and emotional itinerary, rich in sequences and layers of interpretation, the works, which are often marked by traces of the tangible (such as Ben Vautier’s key, Philip Corner’s piano keys, or Bob Watts’ stamps) show the splendour of a syntactic self-sufficiency perceivable as an uninterrupted and fleeting polyphony that can never be fully documented. Beyond the inclinations of each of the 14 artists represented in the exhibition, the open structures of Portfluxus experience passages and flexions that preclude any opening towards fabulation or illusionism. Rather, they reveal the process of happening; the unfolding of the event as a flow and the image – not understood as a ‘fact’ constituted and brought to its conclusion – but as a process in the making, capable of infiltrating stratified temporalities where we can rediscover the directions in which culture is moving today. We therefore thought of setting up an ‘installation’ similar to a frontier without distracting media and superstructures: one that can be crossed by moving beyond traditional criteria, with the same spirit of randomness that characterised the movement. In this way, the Mario Franco Archives, as well as being a place of study, documentary analysis, and research, prove to be an extraordinary gateway through which we can perceive the changing and metamorphic appearances of time-space.