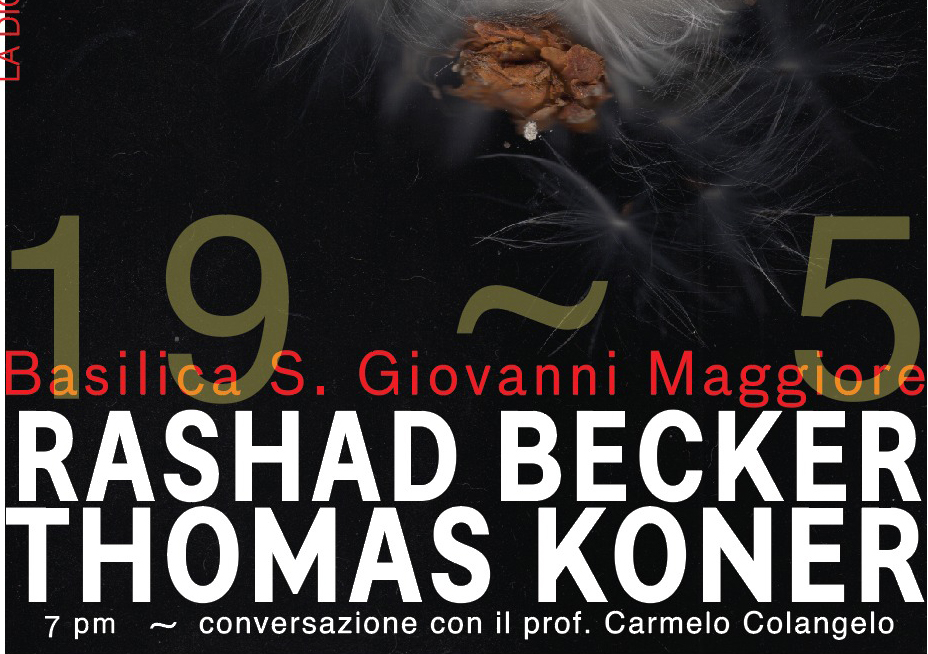 Location and line up of excellence for the fifth round of “La Digestion – musica ascoltata raramente”, a festival for the most innovative languages of contemporary sound, result of the synergy between the Phonurgia and EM-Arts associations and the Morra Foundation.

The event of May 19th will see the two masters of the German experimentation in dialog with the magnificent spaces of the Basilica of San Giovanni Maggiore Pignatelli. As in the case of the 3 February event, the performance will be accompanied by a theoretical moment, in conversation with the philosopher Carmelo Colangelo, in an attempt to delve into the meanings that the sound opens, thanks to its archetypical force that insinuates it in the practices, in the imaginary, in the cultures.

Rashad Becker is considered among the most original electronic musicians of the last years, because he is able to create extremely complex, but extremely musical sound textures, which recall deconstructed fanfare and abstract sculptures. In fact, part of his compositional process consists in translating into music the geometric systems that govern, for example, the models of organization of social groups or linguistic models. He is at the same time one of the most respected global sound engineers, having worked on over 1200 records. Housed in the most prestigious international festivals, it is for the first time in Naples.

Thomas Köner is a multimedia artist with an unmistakable personality. His music is a cross between ambient and drone, created from incredible recordings made by the artist in some of the most remote places on the planet, such as the Arctic Polar Circle or the Amazon Rainforest. The intensity of his music projects the audience into an abysmal, almost static dimension, pushing the listening to its most peripheral and primitive regions.
The dry and severe poetics of Becker and the lacerated and immersive environments of Koner seem to be suspended at the two opposite vertices of sonic art, but they find common ground in the power and immersiveness of live performance and echo resonant in the listeners’ experience.
The event is realized thanks to the support of the Goethe Institut of Naples, under the patronage of the City of Naples and the kind concession of the Basilica by Fondazione Ordine degli Ingegneri di Napoli.

Rashad Becker, is one of the finest thinkers of living sound.

“Rashad Becker’s work is probably the closest thing we currently have to an overwhelming glance through a break in the fabric of reality” – Brainwashed magazine.

His compositions are multi-layered narrations populated by a set of sound entities, some pleased, some shy, some agitators, others ready to surrender. Often there is a tragic-comic touch, like a cartoon version of what might be a requiem from a dream (or even a dance of fertility from another dimension).
The most recent works include the Traditional Music Of Notional Species cycle, published in two volumes on PAN and a work in several parts entitled Based On A True Story that draws scores from historical events in a sort of “sound staging”. In this context, it is currently commissioned by the New York ensemble Alarm Will Sound and the string ensemble Berlin Kaleidoskop.
Rashad is mainly active as a solo artist, but he is in a series of permanent collaborations alongside Eli Keszler, Moritz von Oswald and as a member of the Moleglove formation. Other and more sporadic collaborators were Okkyung Lee, Andre Vida, Ashley Paul and Valerio Tricoli.

Thomas Köner (Bochum, 1965) is a German musician and artist.

During his studies, he devoted himself to the intensive research of sound in the recording studio. His first impulse was to avoid the rhythm and the melody and concentrate instead on the phenomenon of the color of the sound. To intensify the sound experience, he decided to work with other media, in the beginning collaborating with the film artist Jürgen Reble (Alchemie 1992). Later, he began composing soundtracks and accompanying old silent films with live electronic music for the Louvre Museum in Paris. Köner’s interest in combining visual and sound experiences to extend the effectiveness of his sound works allowed him to arrive at the installation and led him to collaborate with Max Eastley, in which the combination of sound sculpture and performance became central. “List Of Japanese Winds” by Max Eastley and Thomas Köner is an installation commissioned by the Hayward Gallery in London. The Center Georges Pompidou commissioned the sound work for an installation by the filmmaker Yann Beauvais.
Another field of sound exploration and radical sound design is Köner represented by the club culture, which Köner considers an ideal platform for intensive and physical listening. His project Porter Ricks, along with Andy Mellwig, is acclaimed in the techno world, with commissions for “Nine Inch Nails” and even a remix of Claude Debussy for Universal Music.

Carmelo Colangelo works at the Department of Philosophy at the University of Salerno. He was a scholar and assistant at the Faculty of Letters of the University of Geneva. Starobinski has translated the volume Action and reaction. Life and adventures of a couple (Einaudi 2001). He is the author of numerous essays, including Limite and melancholy. Kant, Heidegger, Blanchot (Loffredo 1998), as well as articles about Kafka, Merleau-Ponty, Canetti, Bataille, Levinas, Maldiney. His latest work The appeal of appearances is dedicated to Jean Starobinski.