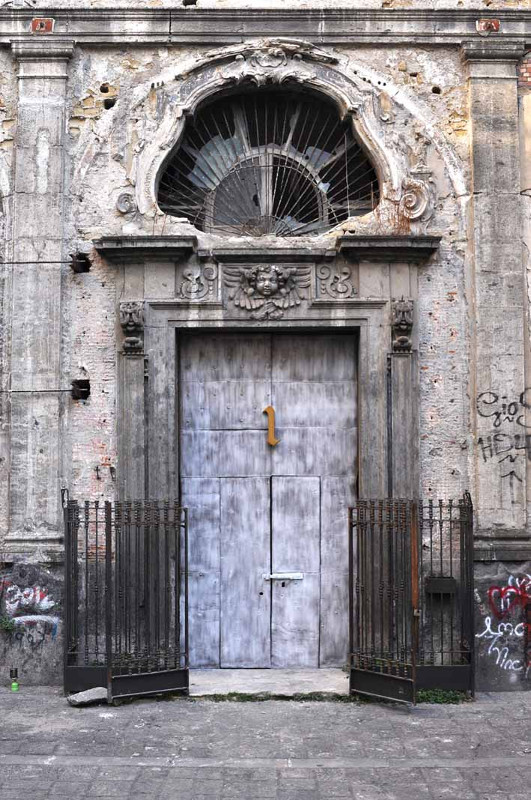 Since the beginning of September, in Naples, it is visible the first intervention of Gian Maria Tosatti’s project Seven Seasons of the Spirit. The whole series of works is thought for showing itself into the urban space almost secretly, under the skin. As wanted by the artist, the first stage of this path, 1_The plague, will be officially presented on September 26th, the day dedicated to Saints Cosmas and Damian, only after it has already run across the body of the city. A day that has not been chosen by chance, because the epicentre of this first stage of the project is precisely located in Saints Cosmas and Damian Church, in the old town centre of Naples.

Built in 1616 at Largo dei Banchi Nuovi, in the place where it was the lodge of merchants, the building was converted, then, into a House of God and it was enlarged by Luigi Giura. The facade uses the preexisting structure, still visible in the sixteenth-century curved arches. Two workshops open in the lateral wall plugs, now occupied by commercial activities, while the monumental piperno portal, surmounted by a big polylobed window in plaster stands out in the central one. In the past, Celano assures, a painting by Donzelli and another one by the school of Luca Giordano were in the interior. The building, closed since the Second World War, has been re-opened in order to host Tosatti’s installation, which characterizes itself as a work with an extremely mimetic profile in respect to the identity of the place and to its context.

Tosatti’s site-specific intervention is aimed at giving a further and specific reading of the identity of this building, once dedicated to religious cult, and at connecting it to the broader discourse about the city of Naples, articulated by the artist through its project. The single elements the artist arranged in the church subtly allude to the history of the place, they contribute to the creation of a visual palimpsest, an “archive of memory” hanging between the imaginary and the symbolic, weaving in the vertigo between the original shape and function of the space and its re-functionalisation made by the artist. Tosatti’s intervention yearns for the environmental dimension and that is the reason why it expands also to the neighborhood area, where the church insists, and to the ancient square. A wax casting inhabits the metal plates protecting the portal of the church, as an element of extreme fragility exposed to the ferocity of a hard neighborhood, while the number “1”, standing out on it, titles this first work and, at the same time, forecasts the entrance into an ‘other’ dimension. The elements that has been chosen or used for the realisation of the work allude to the precariousness of the space, which is, in turn, the analogy of a deep crisis of consciousness invading the present. One perceives a general sense of instability that passes from the place to the visitor approaching it, in a personal and solitary relationship aimed at revealing the empathic experience of the work.
The very reference to the plague, intended as a season of the spirit, as the evil of soul which cyclically comes back in History in order to kill whole generations’ consciousnesses, becomes a mere hypertext. In that sense, the link to The Plague by Camus is evident. In effect, it makes no reference to the history of the church, rather it alludes to a psychological and emotional condition of human being, despite the fact that patristics Vicariato della Cultura teaches us that Cosmas and Damian were doctors, and that certain traditions entrusted them with miraculous qualities.
The action of the artist is charged with further values, connected to the creation of a new social identity for this place, for the environmental impact and for the historical and human events to which it is inseparably associated. The very place becomes the analogy of that space designed by Saint Teresa of Ávila in the first “mansions” of her Interior Castle, where the human being lives at the margin of self-awareness. It is from here, from these separations of the spirit, that an upward path towards the human heights can start. It is just from here that Tosatti can move the first steps of his path, in tension between social and spiritual reflection.
In front of such a crumbling monument, symbol of urban decay and human marginalization, the necessity of a historical testimony to preserve emerges through Tosatti’s work, and at the same time as a tool for raising awareness for the relaunch and the revitalization of the old town centre. In that sense, the work of the artist is charged with social values, and it exhorts to propose a new projectuality. Ultimately, the work aims at making the space active and at creating a dialogue through the place and the lived experience of those who pass through it.

Gian Maria Tosatti (Rome, 16.04.1980 – lives in New York) completed his training in the field of performance at the Center for Theatre Experimentation and Research in Pontedera. In 2005 he returned to Rome to undertake an artistic journey in the area of connection between architecture and visual arts, mainly creating large site-specific installations.
His projects are usually long-term investigations on themes linked to the concept of identity, both on a political and spiritual level. The first cycles of works he developed were “Devotions” (2005-2011) – ten installations for ten buildings in Rome on the archetypes of the modern era – and “Landscapes” (2006-), a public art project in areas of conflict.
Currently, the artist’s research is linked to two new projects, “Fondamenta” (2011-), based on the identification of the archetypes of the contemporary era, and the “Le considerazioni…”, a cycle dedicated to the enigmas that reside in personal memory.
Between 2013 and 2016, his research focused on a seven-part work that inhabited the entire city of Naples entitled “Seven Seasons of the Spirit.”
Tosatti is also a journalist. He was editor of the weekly magazine “La Differenza” and has collaborated with many Italian newspapers as a columnist. He is a columnist for Artribune and writes for Opera Viva. He writes essays on art and politics.
In 2011 he curated RELOAD, a prototype of urban cultural intervention on the temporary reuse of unproductive spaces and he is founder of the project “La costruzione di una cosmologia”, (www.unacosmologia.com).
He has also exhibited at the Hessel Museum of CCS BARD (New York – 2014), Lower Manhattan Cultural Council (New York – 2011), American Academy in Rome (Rome – 2013), Museo Villa Croce (Genoa – 2012) Andrew Freedman Home (New York – 2012), Tenuta dello Scompiglio (Lucca – 2012), Palazzo delle Esposizioni (Rome – 2008), Chelsea Art Museum (New York – 2009), BJCEM (2014), Centrale Montemartini – Musei Capitolini (Rome – 2007), Museo Wilfredo Lam (Havana – 2015), Casa Testori (Milan – 2014), MAAM (Rome – permanent), Castel Sant’Elmo (Naples – permanent). 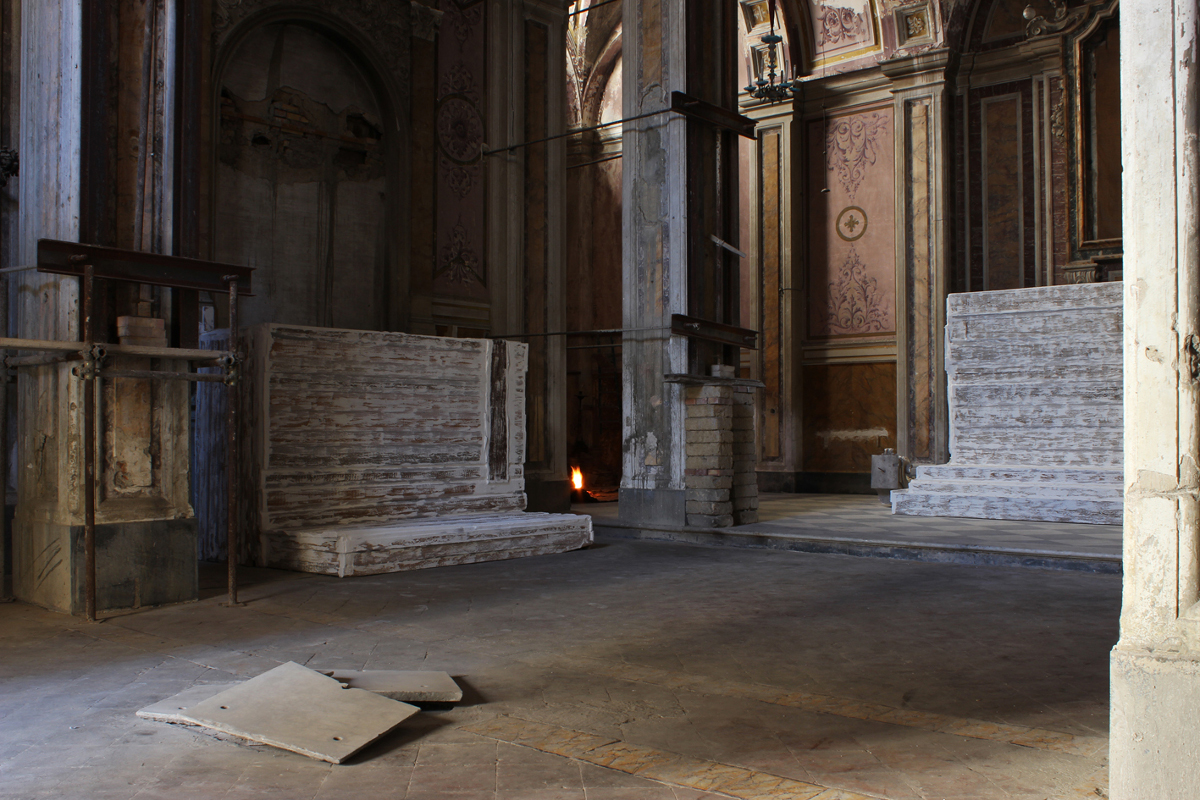 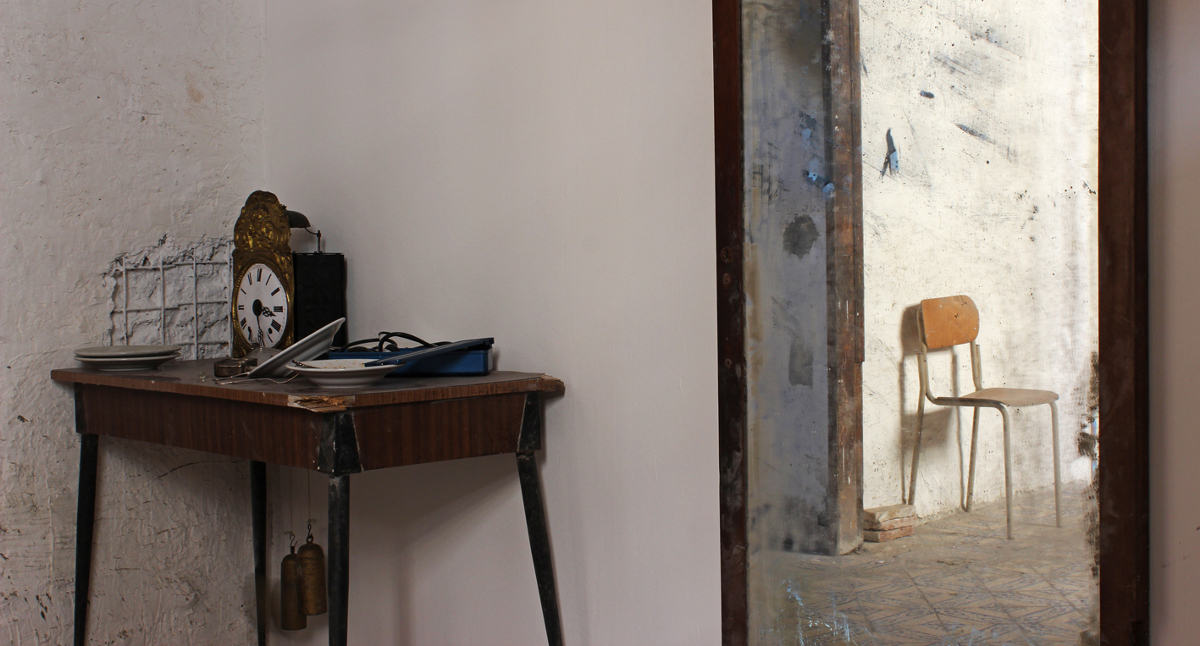 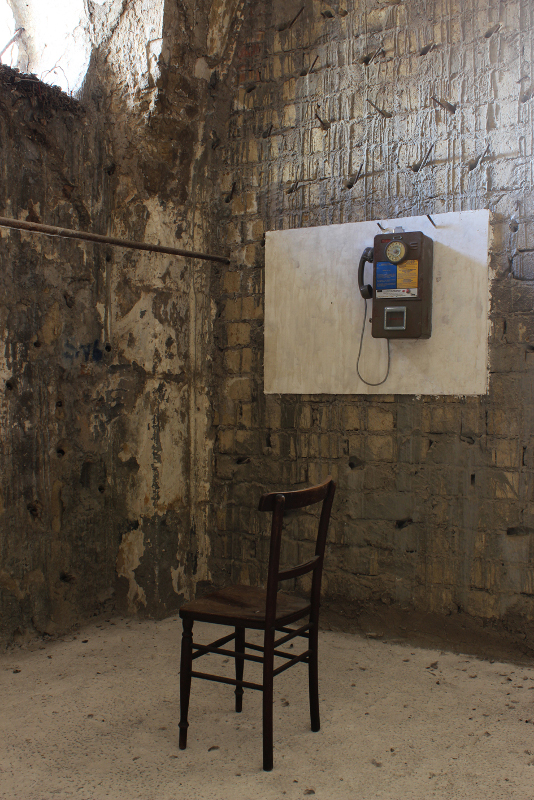