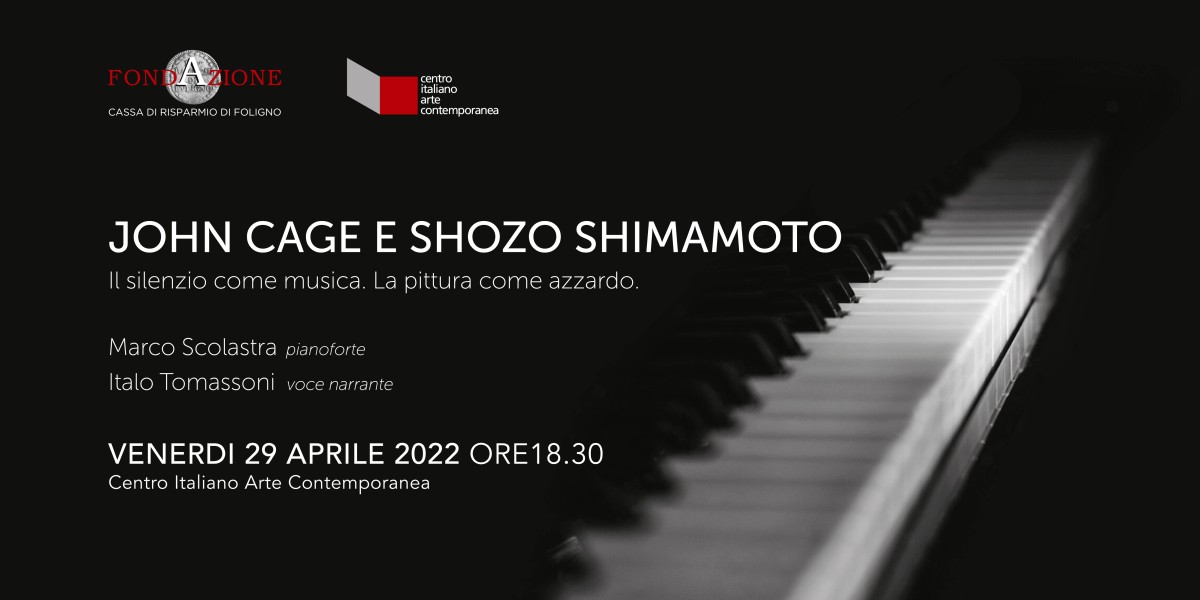 The retrospective follows the Japanese artist’s experiments from the earliest beginnings to his performances in Italy in the early years of the 21st century, highlighting the many links between Japanese culture and contemporary research in the arts in the United States of America.

The revolutionary scope of the Gutai experiments sparked the interest of the leading Western personalities in the art world of the time. Michel Tapié headed for Japan in 1957, followed in 1960 by Peggy Guggenheim and John Cage. Cage returned to Japan in 1962 with Clement Greenberg, Jasper Johns, and Robert Rauschenberg to visit the Osaka Art Gallery, the centre where the Gutai group’s creative forces were concentrated.

With no rules or categories, Gutai musical compositions emancipate the element of randomness. In his contributions to the Gutai Journal, Shimamoto expresses his rejection of the linearity of composition. As some audio productions – now preserved at the Centre Pompidou in Paris and the Ashiya City Museum of Art and History – show, it is tonality that occupies centre stage in his musical compositions, the material essence of sound, to the detriment of a harmonic combination of the elements that make up the composition. It is no coincidence that in 1966 Allan Kaprow called Shimamoto the “pioneer of the happening”.

The points of contact between Shimamoto’s and Cage’s artistic research are their experimentation with performance, their desire to shatter every kind of category, to abandon traditional expressive codes, and their interest in the element of chance and the unexpected. Both artists set in motion action that goes beyond the limits of conventional notation (Cage) and the spatial boundary of the canvas (Shimamoto), thus inducing collective and collaborative audience participatio. Presence, physicality and a new organization of temporal spaces: it is in these three aspects that Shimamoto’s and Cage’s quests intertwine.

Within the museum spaces, in dialogue with the works on exhibition, John Cage e Shozo Shimamoto. Il silenzio come musica. La pittura come azzardo. becomes the arena for action in which pianist Marco Scolastra performs ten pieces by John Cage, La Monte Young, and Erik Satie, interspersed with reflections by Italo Tomassoni. It is a tribute to two great exponents of 20th-century experimental art and a performative event to explore the shared ground of their techniques.

The event is funded entirely by the Fondazione Cassa di Risparmio di Foligno.

Marco Scolastra is an Italian pianist and the artistic director of AdM – Amici della Musica di Foligno. He graduated from the Conservatorio di Perugia under Maestro Franco Fabiani and has studied with Aldo Ciccolini, Lya De Barberiis, Paul Badura-Skoda, Joaquin Achúcarro and Katia Labèque. He has performed for major Italian and fo,reign musical institutions in prestigious venues, including the Auditorium Parco della Musica and Teatro dell’Opera in Rome, the Teatro Regio in Parma; the Auditorium dell’Orchestra “G. Verdi” in Milan; the Teatro La Fenice in Venice; the Moscow State Conservatory, the Tonhalle in Zurich, the Konzerthaus in Bern, and the Musikverein in Vienna.

Italo Tomassoni is an Italian art critic and curator and has been artistic director of CIAC – Centro Italiano Arte Contemporanea di Foligno since 2009. He has been a member of AICA since 1964, working with various newspapers, including La Fiera Letteraria, Avanti!, Vogue, Momento Sera, Flash Art, and Segno. He worked with Alberto Burri in the 1970s to set up the Fondazione Burri, where he was both a board member and a member of the scientific committee. In 1999, he curated a retrospective on Gino De Dominicis with director Harald Szeemann for the 48th Venice Biennale. In the same year he founded the Archivio Gino De Dominicis. Exhibitions he has curated at CIAC include: Spazio, Tempo, Immagine (2009); Calamitati da Gino, with Giacinto Di Pietrantonio (2012); Vincenzo Agnetti, with Bruno Corà, (2012); Julian Schnabel and Carlo Maria Mariani (2013); Hermann Nitsch. O.M.T. Colore dal Rito (2017); Shozo Shimamoto. Grandi Opere (2021).