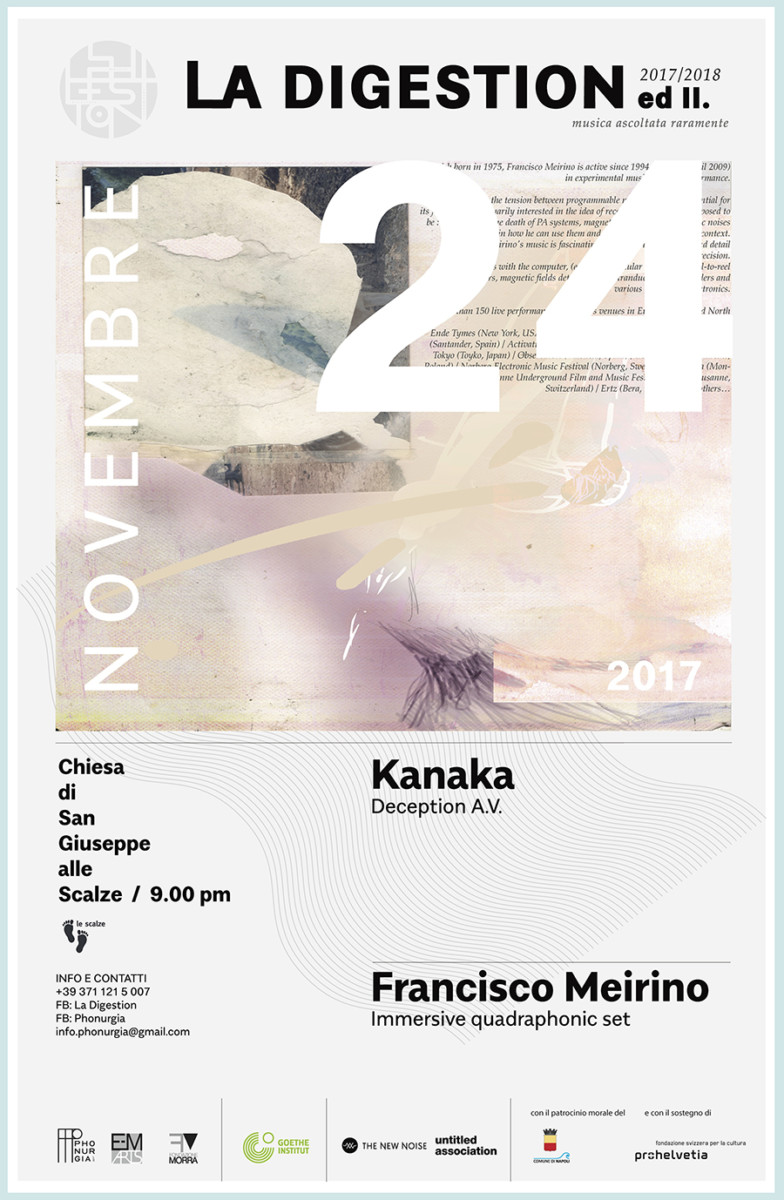 La Digestion- musica ascoltata raramente is pleased to announce the opening of the second season, after the first year’s success characterised by innovation and experimentation. The festival, a result of the synergy between the cultural no profit associations Phonurgia and E-M Arts and the Fondazione Morra, gives attention to the most innovative languages of contemporary sound art focusing, for this edition, on the relation amid sound and space. During the six events of the festival, that occur between November 2017 and June 2018, some Neapolitan locations, among the oldest, hidden and unconventional places, will be rediscovered and reinterpreted through the sound-works of international artists, thus becoming a performing scene to establish contact with the local and the international music culture, between listeners and architectural environments.

From the psycho-acoustics by Florian Hecker to the sound sculpture by Thomas Koner, from OtomoYoshihide’s detournement of turntables to electroacoustics objects by David Toop, and to audio environment/performance by Pierre Berthet and Rye Nakajima planned in the mysterious Cimitero delle Fontanelle, La Digestion second edition takes a course in the contemporary experimentation by exploring the power of sound, that becomes concrete, physical and sensitive. Significant for the incisiveness of the festival, for the willingness to establish solid relations with the city’s cultural life, is the patronage granted by the Comune di Napoli, as well as the partnership with the Goethe Institut and with the Pro Helvetia Swiss Foundation for culture.

After the incredible preview by master William Basinski in the reopened Chiesa di San Potito, the official launch of the second exciting edition is Friday, November 24th with the powerful electronic textures by swiss musician Francisco Meirino and the futuristic audio-video by italian Kanaka, set in the suggestive Chiesa San Giuseppe alleScalze in Montesanto district, thanks to the collaboration of Associazione Le Scalze.

A video-mapping work and an immersive sound landscape by Kanaka group revive the wonderful architecture of the church, and to follow Francisco Meirino proposes a powerful and dynamic quadriphonic live set that combines sound impact and incredible richness of detail.

The poetry of the swiss composer is, in fact, absolutely original: particularly concerned with the malfunctions of electronic equipment, Meirino operates a special recording and composition work of the sounds generated by these desuete machines, highlighting the collapse of a world only apparently dominated by technological efficiency. Thanks to its originality and its incredible handling and composition of the most diverse soundtracks, Francisco Meirino is one of the most important sound artists of the experimental music landscape, appreciated in festivals all over the world.

La Digestion second edition has among its many aims the dedication to offer the public the opportunity to approach a kind of music rarely heard, and not only through performance evenings but also through meetings devoted to engaged listening and conferences with theorists and specialists of this language. Artists in mini-residence have also the chance to wander among the historic stones of Naples, in order to familiarize with the Neapolitan structures and, thus, create a specific setting for audio performance. Workshops, labos and radio interviews will also be elements of a one-year work that aims to mark new pathways into city’s cultural life.
This innovative and multidisciplinary format would offer unique sound experiences, plunging into a search for a “concrete music” that, recognised in international context, has trouble to establish itself in the city. The invitation is to tune into a music to be heard with body and mind, a music to be entertained with astonishment, a music to be digested