Mary Zygouri – Who Is The Third Who (Always) Walks Beside You? 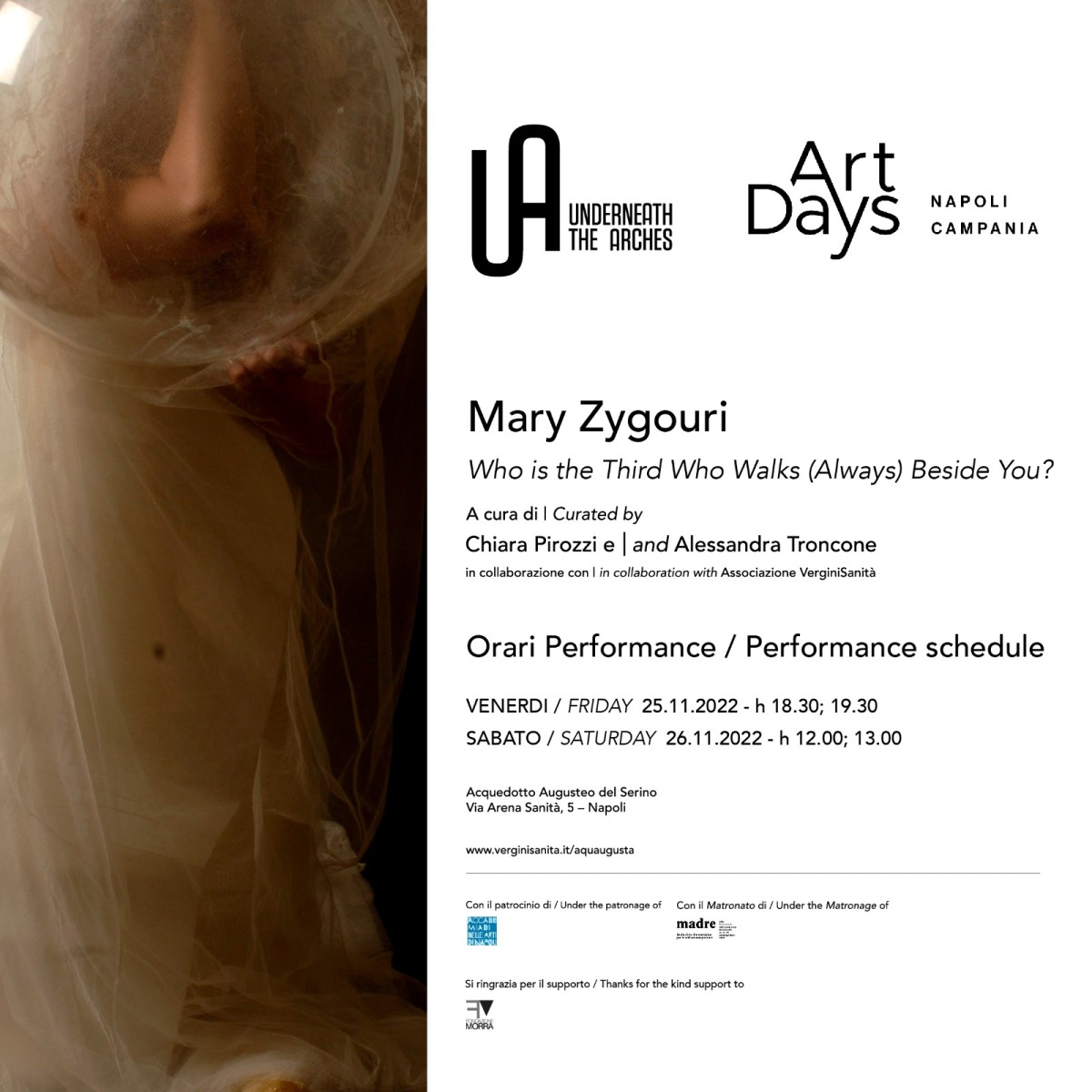 On the occasion of the 2nd edition of Art Days – Napoli Campania, Underneath the Arches presents a new performance by the Greek artist Mary Zygouri, specifically conceived for the archaeological site. The event is curated by Chiara Pirozzi and Alessandra Troncone, in collaboration with Associazione VerginiSanità.

By intertwining research, visions and approaches that have guided the artist towards a close relationship between the human body and the architectural/natural body, Mary Zygouri has created a performance closely connected to the physicality of the place, able to make the remains and pre-existence of the Roman era vital. Mary Zygouri’s action draws inspiration from the poem Wasted Land written by the poet and playwright Thomas Stearns Eliot in 1922. Through the interpretation of timeless and non-human characters who inhabit the archaeological space, the artist transposes the polysemantic, enigmatic and symbolic themes of Eliot’s text in a new dimension that intertwines myth, history and superstition. Conceived as a narration that proceeds through figures in transformation that communicate with the public in three languages ​​(Italian, English and Greek), the performance suggests, as described by the title, the constant presence of an “other” entity perceived at our side even if physically absent.

Underneath the Arches aims to activate a dialogue between archaeology and contemporary art, and to establish a relationship between local material and immaterial culture and the artistic research of international artists. Its main objective is to promote both existing cultural heritage and new production in contemporary art. In the fascinating space of the ancient Roman aqueduct, discovered in 2011 and located underneath a historical building called Palazzo Peschici Maresca, international artists are invited to create temporary and site-specific installations in dialogue with the space itself and the surrounding area. Previous exhibitions include works by Arturo Hernández Alcázar (Mexico City, 1978), Hera Büyüktaşçıyan (Istanbul, 1984), Adrian Melis (Havana, 1985) and Jumana Manna (Princeton, 1987).

The project is kindly supported by Fondazione Morra, and carried out under the Matronage of Madre Museum / Fondazione Donnaregina per le arti contemporanee of Naples, and under the patronage of the Academy of Fine Arts in Naples. Thanks to Paola Ricciardi for the choreographic coordination.

Mary Zygouri (Athens, 1973) holds a BA from Athens School of Fine Arts and a Master FA at Chelsea College of Art and Design, London. She lives and works between Athens and Italy. In 2017, she was invited by Documenta 14 to the main exhibition in Athens and Kassel at Palais Bellevue. Her solo shows include The Repetition of the Impossible, Prometeogallery di Ida Pisani, Milan (2018) and ZOOpoetics-ZOOpolitics, Studio Stefania Miscetti, Rome (2011). She has performed and exhibited in numerous group shows at international museum and institutions, including Galleria Nazionale d’Arte Moderna e Contemporanea, Rome; Mu.ZEE, Ostenda; EMST, Athens; MOMUS, Salonicco; Cittadellarte–Fondazione Pistoletto, Biella; Dutch Art Institute, Arnhem; IILA – Istituto Italo-Latino Americano, Rome; IKSV – Istanbul Foundation for Culture, Istanbul. In 2012, she was awarded by the ΑICA Hellas. In 2014, she collaborated with Michelangelo Pistoletto at the performance Venus of the Rags /INTRANSIT/ELEUSIS at the Aischyleian Festival, Eleusis. She created ENYPNIO (2019) at the archaeological site of Paestum, with the support of Fondazione Gatto (Salerno) and LYSIS (2022) at the archaeological site of Amfiareio Oropos in Greece, with the support of NEON Foundation. Her practice has been featured and reviewed in several art magazines and academic journals.