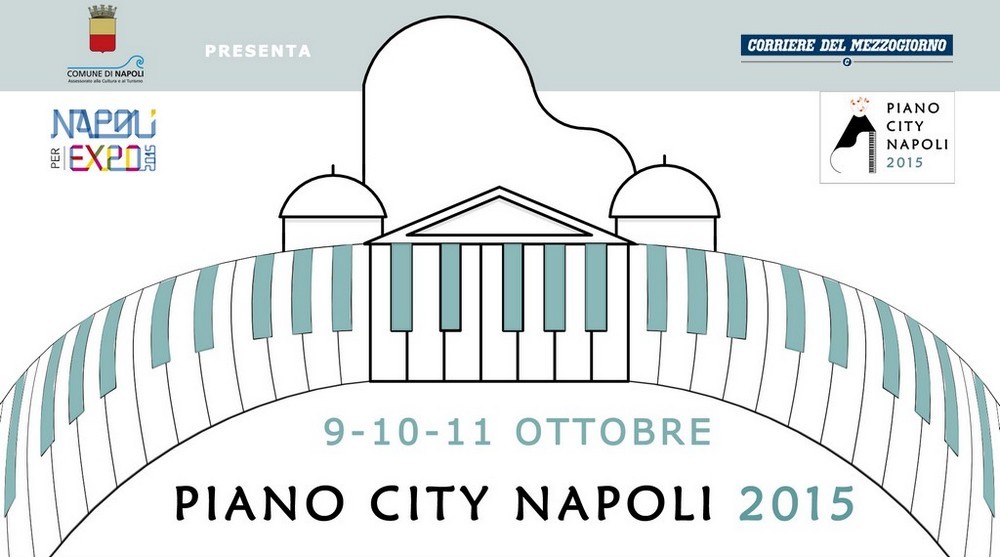 Piano City Napoli 2015 took place on the evening of Friday, October 9th, with a very suggestive piano performance along the colonnade of Piazza del Plebiscito. “The Column Concert” was created by Massimo Fargnoli in collaboration with Fondazione Morra which will be also one of the partners of the festival. At the end of the opening ceremony Daniele Lombardi’s symphony for 21 pianos will be played. Piano City Napoli, which is now at its third edition, is organized and planned by Alberto Napolitano pianoforti – Piazza Carità, supported by the cultural department of the city of Naples and sponsored by FAI-Campania and many other important associations. The 21 grand pianos will be located on the left  wing of the colonnade of piazza del Plebiscito. The 21 pianos coincide, stunningly, with the number of spaces between the columns. While the sound will be heard all around the huge square through a sophisticated PA system, each position will be lit by shimmering different colour lights according to Alexander Scriabin’s synesthetic criteria (this year will be the 100th anniversary of his death). Inside the spaces of the columns on the right wing of the colonnade there will be an exhibition regarding the Neapolitan piano school, realized by the “Accademia Musicale Napoletana” (founded by Alfredo Casella in 1933) in order to connect present,  past and the development of a sumptuous cultural tradition of the city. Following the joyful mood of this festival together with the complexity and strictness of the choice of the location, this marathon has been named “The Column Concert”, in honour of such an incredible scenario to what we could define as an auditory installation. The name is also recalling, by phonetic assonance, the famous album by Keith Jarret, recorded 40 years ago at Koln Opera House, that gave new horizons to contemporary piano music.