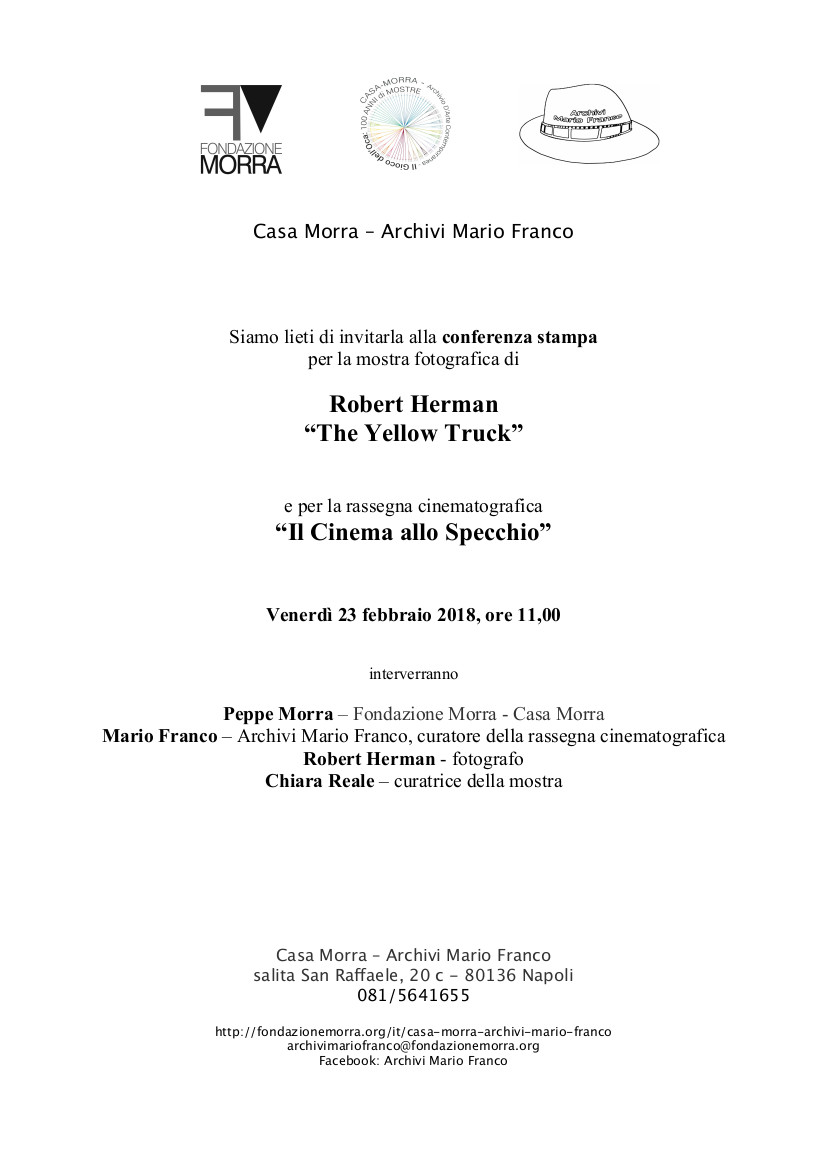 Robert Herman is one of New York’s most important contemporary street photographers, with photographs and publications on show in numerous key American and European art galleries.

This totally new exhibition, ‘The Yellow Truck’, brings together 20 photographs narrating the production phases of ‘Vigilante’, a B Movie set and produced in New York in the 1980s. The shots on show in the exhibition are dedicated to the many professionals who work hard to ensure that the machine of cinema keeps rolling; people who never come to the fore but always, and inevitably, remain but rapidly scrolling names among the credits.

The short film ‘Story for Lisa’ 2 (USA, 1979, 16mm Colour/Black and White, 14 mins), written and directed by the artist, helps the viewer enter Herman’s world and gain a better understanding of what he means by ‘film making’.

As the curator of the exhibition, Chiara Reale, explains: ‘the narrative characteristics of Robert Herman’s photography are very close to those of the language of film, a language that the artist began to learn from an early age. Herman grew up in Brooklyn amid the dusty armchairs and the smell of celluloid in his father’s small arthouse cinema where he began his education by watching the films of Antonioni, Fellini, and Rafelson. He enriched and later consolidated his studies at the New York University Film School, where his experience would have a decisive impact on the development of his aesthetic code, discernible in his photography to the present day.

In ‘The Yellow Van’, the indissoluble link between cinema and the artist’s photography is addressed openly, revealing the points of tension and the raw nerves in this relationship. The exhibition consists of shots taken by Robert Herman, a street photographer who lives and works in New York, during the production of Vigilante, a B movie for which not all the people involved would end up being paid, with backstage shots and stills that tell the story of an almost atavistic love for a world that was, to cite Herman himself, his ‘life and salvation, with all its distortions’.

His goal to reveal the darker sides of the film ‘establishment’ is set in motion at the ‘Il Cinema allo Specchio’ film festival: 14 films will be screened every Wednesday and Thursday evening from March 1st to April 26th  starting on March 1st after the opening of the exhibition with Wim Wenders’ ‘Alice in the Cities’. Entry to the Archives and screenings is free and open until all places are taken.

The curator of the exhibition, Mario Franco, explains that the ‘so-called “metacinema” is cinema that shows and talks about itself and describes how its organisation, the production processes, and the economics of film actually work; it recounts the evolution of its history. It is a type of cinema that, in appearance, decides to uncover the deception, to reveal the trick, behind every film. Of course, many great filmmakers have reflected on their work, on beauty, but also on the compromises and existential crises of their work. (Godard with Contempt, Fellini with 81/2, Truffaut with Day for Night).

Films set in the world of cinema also include works dedicated to its rudimentary beginnings as an industry (Nickelodeon) or those set in the Hollywood of the late 1920s, when the first talkies came out, and silent actors feared for their careers in one of the most significant moments in the history of film production, at a time when expressive gesture was becoming obsolete in the face of the possibilities offered by sound. It is interesting to note how Singing in the rain (1952) exploits the potential of sound and Technicolor, while The Artist resurrects black and white for a silent film that focuses entirely on the soundtrack, even in 2011. But in homage to Herman’s photographs documenting a B movie whose workers and actors went unpaid, and that was interrupted due to production problems, here is a film, The state of things, where Wenders tells a similar story, or Burton’s Ed Wood, that tells the story of the strange career of the ‘worst director in the history of cinema’, a grotesque hymn in praise of ugliness that invites us to reflect on film genres and sexual ambiguity and to abandon any prejudice as we ask ourselves what can legitimately be defined ‘art’. Another film dedicated to Robert Herman, raised in the cinema run by his father, is The last picture show by Peter Bogdanovich, a young critic in the 1970s in love with the cinema and its legendary characters. It is also dedicated to the city of New York to which Herman devoted much of his photographic work.

In the tradition of our Archives, which have the habit of showing films that are difficult to see elsewhere, we will also show a hitherto unseen image of New York in a performance by Steve Reich, a homage to its streets and the sounds of the Big Apple. Reich is one of the fathers of minimalism, winner of the 2009 Pulitzer Prize and the 2014 Golden Lion at the Venice Music Biennale. Reich dedicates his music to Manhattan and then leads us to the rehearsals and finally to the theatre performance. This too is a metalinguistic discourse, focused on the very act of composing: an ‘emotional’ point of view that ‘shows itself showing’ and ‘looks at itself looking’. Self-reflection, that may be summarised in the idea that creation can question itself on the very nature of the creative act, is typical of modernity, perceived as an integral part of producing meaning in literature, theatre, painting, and cinema.